Home › Communication › If You Just Communicate You Can Get By

If You Just Communicate You Can Get By

If You Just Communicate You Can Get By – But If You Communicate Skillfully, You Can Work Miracles

One of the biggest privileges we have as humans is the ability to communicate with one another in deep and meaningful ways. No other living creatures have the ability to relate 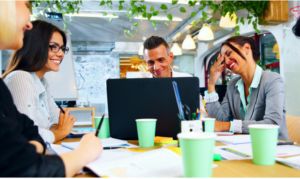 with one another on the level that humans do. While there are many ways that we experience depth in relationship, few things are as significant and powerful in our search for connection as good conversation.

If you think about it, it is quite amazing that humans have the ability to grow up in entirely separate households, cities and sometimes cultures and still be able to have intelligent and meaningful conversation with one another. A child born in the center of London and a child born in the middle of nowhere in Canada could meet and share a conversation because they both have the ability to communicate in the same language. It’s really amazing.

Because the ability to communicate in depth with other humans is one of our most distinguished privileges, we should never take that ability for granted. Instead, we should do all we can to increase our ability to have good conversation with the people around us. Think about all of the opportunities you have each day to engage another human being in conversation. You can talk to rocks, trees, or your favorite stuffed animal for as long as you want and you will never get a response. Saying something as simple as “hello” to another person can elicit a response.

One of the best ways to get good at conversation with other people is simply to practice. Take every opportunity that presents itself to learn the art of making good conversation with other people. I learned from taking a Dale Carnegie course years ago and simply reading Carnegie’s hallmark book “How to Win Friends and Influence People.” Start by saying hello to the people you pass on the street. Ask the person who is checking you out at the grocery store or the teller at the bank how they are doing and ask if they are enjoying their day. Better yet, ask a good open ended question, one that cannot be answered with one word or grunt. Learn to respond with more than just one word when someone asks you a question. You will be surprised at how quickly you learn about art of conversation by doing small things such as these.

One of the things that is necessary for getting good at conversation is to really care about people and the things that they care about. The late Jim Rohn said, “If you just communicate, you can get by. But if you communicate skillfully you can work miracles.” It will be much easier to have a good conversation with someone if you are engaged and really caring about the things they are saying. Some people ask a question so they can respond. Don’t be like those kind of people. There is nothing worse than trying to carry on conversation with someone that is disinterested in it. So commit to asking people questions that you really want to know the answers to and you’ll be a step ahead when it comes to making great conversation. If you’re serious about becoming a masterful communicator, consider joining a Toastmasters Club. There is one in nearly every city and it’s the best and most economical way to enhance your communication (and leadership) skills I’ve ever seen.

The ability to have good conversation is valuable because it is unique to humans. Enjoy the privilege you have to learn from others and to share wisdom with them by getting good at conversation. I’ll close this week with another quote from Jim Rohn (he’s my personal favorite!) “Take advantage of every opportunity to practice your communication skills so that when important occasions arise, you will have the gift, the style, the sharpness, the clarity, and the emotions to affect other people.”