Home › Leadership › What is it that you value? Are you sure?

What is it that you value? Are you sure?

What is it that you value? Are you sure?

I was recently working with a coaching client helping him through the process of adding to his staff. He’d been disappointed with the last three people he had taken on so he wanted to be very thoughtful about how to go about getting “just the right person” in the two positions that were available.

I saw that he had given a lot of thought to the positions and who he was looking for, which is a great thing. Sometimes I find that small business owners think a warm body is all they need.

But I had two other objectives to cover with this client.  The first was to figure out why the last several people didn’t work out. I asked him to explain what was missing in their performance that led to their release.

He thought for a moment and admitted they had the skills he wanted. They did work hard and their work, although not perfect, could have eventually been very good for the company.

So what was it? Did they not want to achieve as much as him or want the company to be successful?

He agreed that he thought they were ambitious and wanted to reach the company goals.

If that was the case, what was the problem? This led me to the other objective I had in mind – what “ruffled” him enough to let them go.

He admitted there was just something that rubbed him the wrong way. Hmmm. I can’t tell you how often I hear that sentiment expressed by Small business owners. 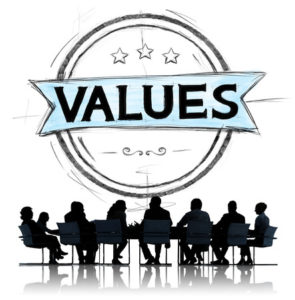 What it comes down to is that it is extremely important, especially for small business, that the owner and staff share similar values. Having a small business staff is like having another family. There are a lot of emotions behind a small business and families and that’s why having common values is so important.

Achieving success may be the goal common to many people. But what each person is willing to do to reach that goal may be worlds apart. Some may think of it as ethics or morals, but I think that values go even deeper.

Where you stand in issues like these has an impact on how you run your business and the day-to-day operations of your staff. It also affects the partnerships you create and the relationships you build. On what do you build your reputation and credibility? It’s your values put in action.

If the people around you function within a different set of values, there will be conflict that can morph into resentment and anger – which is why some people “rub you the wrong way.” Pay attention to that feeling when you are choosing who will work with you and work for you. Find those who have like-values and you will probably be able to work through most obstacles and issues.

These are the kinds of things that we talk about all the time at Grow Your Business Coaching. Building a business takes a lot of technical skills and know-how, but there’s much more underlying achievement.