You Gotta Wanna – Secrets from Think and Grow Rich

You Gotta Wanna – Secrets from Think and Grow Rich

When Edwin C. Barnes hopped off the freight train in Orange, New Jersey, more than 100 years ago, he may have resembled a tramp or vagabond in appearance, but his thoughts were those of a king!

Think And Grow Rich would be the thoughts of a king filled with determination and an idea so ingrained inside of him that it could be called a burning desire.

As he made his way from the railroad tracks to the 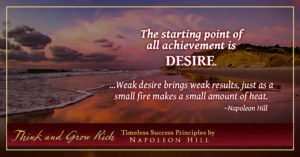 Thomas A. Edison office, his mind was racing. He saw himself standing in the presence of the great Thomas Alva Edison, a true legend even in his own time. Barnes heard himself asking Mr. Edison for an opportunity to carry out the one consuming obsession of his life, a burning desire to become the business associate of the great inventor. He felt the feelings flooding over him when the great inventor gave him the chance to prove himself.

Barnes desire was not a hope! It was not a wish! It was a keen, pulsating, passionate desire which transcended everything else. It was definite.

The author, Henry David Thoreau said “If one advances confidently in the direction of one’s dreams, and endeavors to live the life which one has imagined, one will meet with a success unexpected in common hours.” Young Barnes was doing just that, join me to explore this concept for your self.

It’s no doubt, Edwin Barnes had The Think And Grow Rich philosophy, albeit he didn’t know it at the time. Barnes passionate desire compelled him to take action. You can learn more about the Think and Grow Rich Philosophy here on a complimentary call.

The desire was not new when he approached Edison. It had been Barnes dominating desire for a long time. In the beginning, when the desire first appeared in his mind, it may have been, probably was, only a wish, but it was no mere wish when he appeared before Edison with it.

A few years later, Edwin C. Barnes again stood before Edison, in the same office where he first met the inventor. This time his desire had been translated into reality. He was in business with Edison. The dominating dream of his life had become a reality.

The Think And Grow Rich philosophy was being put into practice. Experience for yourself how this works and join us for your personal journey through Napoleon Hill’s classic Think and Grow Rich.

Many people who knew Barnes envied him because of the break life yielded him. They saw him in the days of his triumph, without taking the trouble to investigate the cause and tireless effort of his success.

Barnes succeeded because he chose a definite goal. He placed all his energy, all his willpower, and all his effort, everything back of that goal. He did not become the partner of Edison the day he arrived. He was content to start in the most menial work, as long as it provided an opportunity to take even one step toward his cherished goal.

Five years passed before the chance he had been seeking made its appearance. During all those years, not one ray of hope, not one promise of attainment of his desire had been held out to him. To everyone, except himself, he appeared only another cog in the Edison business wheel, but in his own mind, he was the partner of Edison every minute of the time, from the very day that he first went to work there. How does one keep that focus? Let’s explore it together.

As you can imagine from this story, the determination and desire to work with Edison remained a constant flame in the heart and mind of Barnes. The Think And Grow Rich philosophy was just as much a part of Barnes as his own arms or legs.

Standing alone in a crowd can seem difficult to do if you have not made a personal commitment to yourself regarding what and where you want to go in life. Join us for a personal journey through Napoleon Hill’s classic Think and Grow Rich and learn the timeless skills and attitudes hidden in Think and Grow Rich.

The reward will come to you as it did for young Barnes if you keep the faith and the belief alive within yourself. You’ll actually learn how to do this for yourself, your family and your business when you join us for a personal journey through Napoleon Hill’s classic Think and Grow Rich.

Remember the words, burning desire and come join us on a personal journey through Napoleon Hill’s classic Think and Grow Rich.