Faith, Visualization of, and Belief in the Attainment of Desire

As a group of us, 31 all together, are going through the classic, Think and Grow Rich by Napoleon Hill, and recently, we’ve been talking about Faith, the second step toward riches. The question was asked, “How is Faith an Emotion?” The book talks about faith that way. 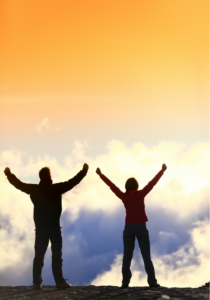 Faith is believing in something. Confident belief in the truth, value, or trustworthiness of a person, concept or idea. It is the mental acceptance of the truth or actuality of something. In its positive aspect, it is a belief in the favorable outcome of anything undertaken.

Another way to think about faith, is to think “Absolute Confidence”. When a person has faith in their beliefs then half of the battle to acquire success is won. It works like this… when faith is combined with the vibration of thought, then the subconscious mind picks up the vibration and translates it into the spiritual equivalent and transmits that thought to the infinite intelligence.

How you can develop Faith

The method by which one develops faith where it does not already exist is very difficult to describe. Hill says, “Faith is a state of mind, which may be developed at will.” This feat can be accomplished after the thirteen principles, which are in the Think and Grow Rich book, have been mastered.

All thoughts, which have been given feeling and mixed with faith, begin immediately to translate themselves into their physical counterpart. The emotions or the feeling portions of thoughts are the factors, which give thoughts vitality, life and action.

Unfortunately, there are way too many people who lack faith in themselves; these people believe that they are doomed to poverty and failure because of some strange force over which they have no control. It might help to remember what the famous psychologist, Carl Jung said, “Until you make the unconscious conscious, it will direct your life and you will call it fate.”

Any order given to the subconscious mind with belief, or faith will be met with success. Be a student of this fact and practice how to give your subconscious an order and how to have that order mixed with faith.

Your ability to do this successfully will come through practice. It cannot come by simply reading instructions… the lessons are learned by the experience of doing. The values of faith are endless; faith is the elixir, which gives life, power and action to the impulse of thought.

Your aspirations, goals, and dreams begin in the form of thought! The size of your goals is only limited only by your mind where the thought was put into motion. Faith removes limitations!

Be wise, move forward and work on this ability to develop faith where it doesn’t already exist. Do this and take a few minutes each day to read the classic, Think and Grow Rich by Napoleon Hill. You might be interested in being in the next group who studies this classic, click here to get on the waiting list.