Home › Networking › Is your pool deep or broad?

Is your pool deep or broad?

Is your pool deep or broad?

A colleague, we’ll call Sam, was lamenting a disastrous sales call over a cup of hot java this week and I kind of felt bad for him.

Sam had been trying to find a contact in a firm he had targeted as a big prospect. He put out the word he was looking for a warm introduction to Alan, the VP of the firm. A fellow small business owner responded saying he knew Alan and supplied a contact number. Sam was thrilled.

He spent several days preparing all the information and materials he’d need. He thought through the call he’d make and the different directions the call might take. After about a week, he made the call. He got by the gatekeeper by saying he’d been referred by “Ed,” a friend of Alan’s and that his call was expected.

When Alan got on the phone, he had no idea who “Ed” was and was not at all receptive to the call. Same felt a fool. Then he was mad, because his chances had been blown.

Where did it all go wrong?

Sam accepted Ed’s offer of a connection and a number in good faith. But apparently Ed didn’t really “know” Alan. Perhaps they had met at some seminar, trade show, or networking event, but there wasn’t enough of a connection between them for Alan to even remember Ed’s face or name.

There is a huge difference between a referral and a proffered contact number and here’s what it is:

When someone offers a referral, it is implied that the person has or will contact the person being referred and let them know that their name has been given as a referral and someone will be in touch with them soon.

In other words, if Ed was actually providing a referral, he would have contacted Alan and told him that Sam would be in touch in the near future. A good referral would have provided some information about Sam and his business as well. This is often called a warm introduction. It is connecting two people who are both known by the middle man – the connector.

If that doesn’t happen, what is being provided is essentially just a cold call. It’s a name and a number. That’s it.

Another example that comes to mind is one where someone was looking for a vendor to do a printing job. Someone at the table – honestly – said she had met “a guy who does signs” and said his name.

Another someone else at the table immediately offered that she had worked with him and it had been a disaster, ending with her losing a deposit and never getting the sign she wanted. The person who offered his name said she learned a big lesson right then and there. Only refer people you know and can personally vouch for their services or products.

How valuable are YOUR contacts? 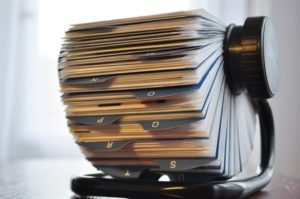 I am extremely proud of the contacts I have. In fact, I call it the Grow Your Business Coaching ‘million-dollar rolodex’ even though no one has a rolodex anymore. But I can call anyone in my contact list and within a couple of seconds, we are reconnected and remember each other and I can tell you what their business is, where it is, and what they do.

I give everything I can to my coaching, training and mastermind group clients – including the benefit of years of rich relationships I have accumulated into that ‘rolodex.’ I honestly believe that we all achieve more when we work together and that’s why my list is so valuable.

There are a lot of people who are also proud of their huge contact lists. They love having all those links on their LinkedIn account. But what good is a list of names when they are people you don’t really know? And worse, that you have no idea of the quality of their work?

As shown above, a list of names and numbers aren’t going to get you anywhere. It’s like having your own phone book – it’s a reference, maybe, but not really an effective tool. And not something you can confidently offer to others. It’s a shallow, wide pool

Instead, keep your contacts rich with relationships. Refer those people you know and respect. Keep your pool deep and rich. Remember that your referrals reflect back on you … good, bad and otherwise.

One comment on “Is your pool deep or broad?”